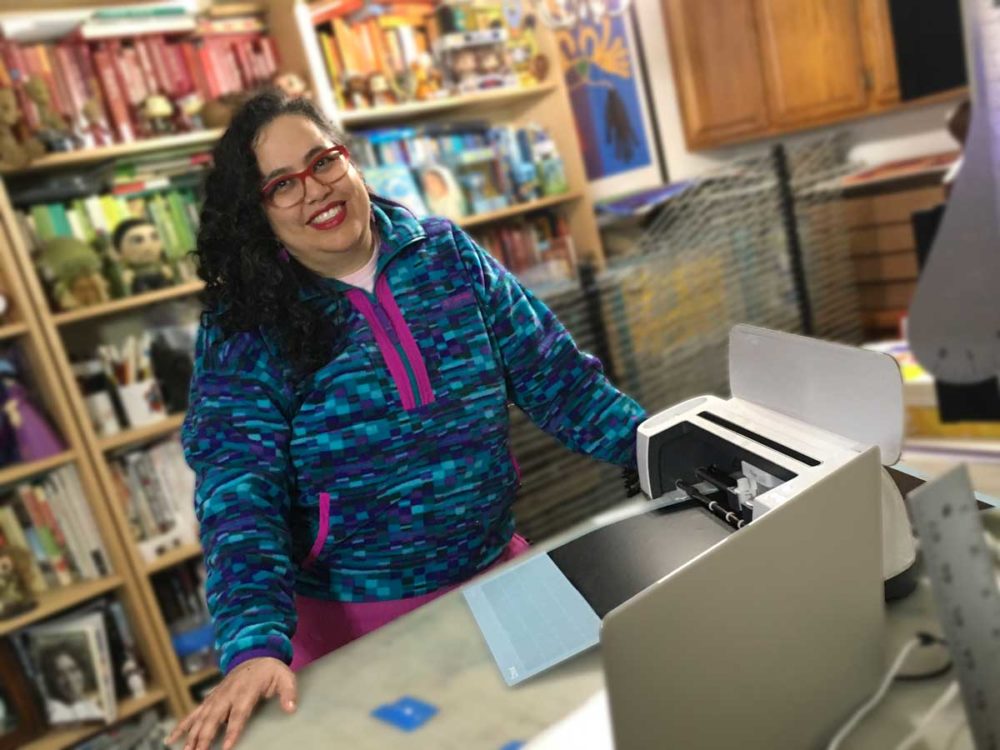 How Melanie Cervantes of Dignidad Rebelde increased her business with Cricut

Never had she sold out of so many prints before she received her Cricut Maker®. Over the course of about three months, Melanie Cervantes and her partner printed over 1600 hand-pulled, screenprinted posters in 20 unique designs using her new machine. The productivity while using the machine has been “unheard of,” she exclaimed to me.

Having the Cricut (Maker) is a game changer.

The following print sold out in one day, and “never had that happened,” she told me. Even in the almost 15 years that she has been printmaking…

She has since printed new editions of this design due to its popularity. In fact, she has printed many new editions this summer with her Cricut Maker. Not only have the prints been so popular, printing them has been made so much easier with her new smart cutting machine.

Who is Melanie Cervantes?

Melanie Cervantes is an artist and printmaker. Her work as been featured at places such as the MoMA (New York, NY), SFMoMA (San Francisco, CA), Smithsonian (Washington, D.C.), National Museum of Mexican Art (Chicago, IL), and even internationally in France, Germany, Slovenia, and Mexico. Not to mention, her work also resides in permanent collections at the Library of Congress, Dartmouth College, and Stanford amongst other various public and private collections throughout the nation. Oh, she also has her own Wikipedia page! Though, Melanie never thought she would have become an artist, professionally.

How Melanie became an artist

Though Melanie always enjoyed making and drawing, her true love was working with color. “Coloring is one of my favorite things to do,” she says.

Melanie and her mom would go to the mall to find clothing she liked, but instead of paying mall prices, her mom “would sketch it out and custom make me those things.” Her mother not only taught her fractions and budgeting, but she “got to learn color” from picking out her own fabrics. Whatever she ended up picking, she would be stuck wearing to school! Melanie explained, her family is “very creative” but also “very much working class.”

As Melanie reminisced, I saw a light bulb spark on in her head. “This was my color scheme,” she told me while pulling up a print she made with her Cricut Maker. “I grew up in the 80s,” she exclaimed. “Everything was purple and neon!”

In 2007, Melanie co-founded Dignidad Rebelde with her partner, Jesus Barraza. Although often dubbed as a “political” artist, Melanie doesn’t exactly label herself that way. It’s more about “fighting for a better life,” which gives way to how Dignidad Rebelde was formed.

Their art is “grounded in Third World and indigenous movements that build people’s power to transform the conditions of fragmentation, displacement, and loss of culture that result from this history.” The term “dignidad rebelde” translates to “dignified rebellion” and this graphic arts collaboration created a space for Melanie and Jesus to work with others that held the same beliefs.

Together, they have worked with numerous organizations such as the Young Women’s Freedom Center, Oakland Museum of California, Sisters of Color United for Education, and the National Domestic Worker’s Alliance in addition to many others.

One of Melanie’s favorite pieces is a collaboration with the People’s Paper Co-Op, a print that used recycled court documents. In a collective effort with other artists, the organization raised over $70,000 for a Mother’s Day bail fund benefitting incarcerated women. Melanie’s particular piece even features poetry written by one of the women who benefitted from the cause. Oh, did I mention it’s printed with screens cut on her Cricut Maker?!

Surviving through art and creativity

In the fall of 2017, Melanie was diagnosed with lung cancer. She took it easy for about one year to recover from surgery “doing only a little bit of art,” mostly because she “physically couldn’t do that much.” Then, an opportunity came about that she couldn’t pass up: a solo exhibition. She. Never. Does. Solo. Exhibits.

When she was invited for her solo exhibition, Melanie decided to make it personal. “So much of the body of work I had produced up to that was very external,” she explained. It was “all things I cared about, but not my personal story.” One such piece was Esperanza.

I have been struggling with ideas of suicide my whole life.. and I made this piece to tell myself something.

Esperanza is about suicidal ideation. Melanie looked at how communities, particularly communities of colors, are impacted by the subject to help contextualize an issue that normally isn’t discussed. “I care about this issue, because I’m connected with it,” she told me.

This piece connected so well with communities that the Los Angeles County Department of Mental Health licensed the rights for Esperanza to include it in their suicide prevention campaign. However, “that was not on my mind,” Melanie said. “I just really needed to address (the issue) because when I first had surgery, I was put on opioids.” She worked with her medical team to wean off pain management pills due to its extremely addictive qualities, but fell into severe depression as one of its side effects.

Esperanza is “one of the works that’s made me the most vulnerable,” Melanie admits. And, it “became part of the healing process.” She discovered the impact of talking “about things that are uncomfortable but critical for us to address.” She realized, “I just got to keep doing this,” because “this is my truth and it’s helping me to make this kind of work.”

As a woman of color, her words resonated so deeply with me that I completely felt what she meant. She said, “if we’re from marginalized communities, we are all experiencing collective traumas.” And, all I could do was nod while slowly closing my eyes and tilting my head down to take it in.

Originally printed in 2018 for her solo exhibit, Melanie made very few pieces of Esperanza. After she got her Cricut Maker, she made another 100 hand-pulled prints. “I could make another 100, too” she told me, excited at the ease of using the machine for her art—something that she didn’t think was possible after sheltering-in-place.

In March 2020, Melanie became grounded at home due to her health and growing threat of the pandemic. She lost access to the outside world. She wasn’t able to see friends. She wasn’t able to go to the store. And, she couldn’t head into the studio, where her screenprinting equipment, exposure unit, and light table were located.

Unable to prep her screens at the studio anymore, she “went back to other mediums that I had experience with, but it wasn’t as satisfying.” Then, recalling a display at Michaels and seeing marketing emails from Jo-Ann Stores brought Cricut® machines back to the top of her mind. Melanie noticed that Instagram users were screenprinting shirts with Cricut machines. Why couldn’t she screenprint onto paper? “Paper is easier; it’s a flatter substrate,” she thought to herself. With a local artist grant she received, she decided to invest in Cricut Maker.

It was amazing. I mean, it is amazing.

Never before had she made or sold prints so quickly before getting a Cricut machine. It was “so much easier to deal with,” she told me, because screenprinting could be done completely at home. Additionally, Melanie didn’t have to wait for the right conditions to create screens. With emulsion, “I might be printing at night and waiting for the sun (to try to dry the screens), then sometimes it still creates problems,” she explained. With her Cricut Maker, she was able to simply cut and place a layer immediately onto a screen for printing.

This new process got rid of pinhole issues, which sometimes occurred when creating screens with emulsion. “Having the Cricut (machine), really makes such a big difference and solves so many issues that can happen with emulsion,” she said. It allowed for more prints per screen than their typical setup, too. Design Space is also “easier (to use and create) stuff than the way we traditionally do it.” Another plus? It also eliminated the need to work with harsh chemicals, which was much better for her health.

Sharing the passion of making

Having a Cricut Maker didn’t benefit just Melanie though. After going back to school for his Master’s degree and then transitioning into a new job, Jesus finally had a little time to rediscover his passion for printmaking. Discouraged by headaches stemming from excessive smoke exposure caused by recent wildfires and having been so busy, Jesus had slowly stepped away from his practice. However, Melanie pushed for him to get back to making with Cricut Maker and to “just make it for yourself.” Sure enough, Melanie saw “the impact on him” when he got back to it. Immediately, people were encouraging Jesus to make more.

I don’t know if that would’ve happened with our regular studio setup. Cricut helped him create conditions so that he could keep experimenting.

“The Cricut (machine) has been so cool” Melanie kept praising to me. She had become a fan. “It’s a million times more user friendly than a plotter,” she said while also telling me about all the ideas she had for making.

So, what’s next for Melanie? She’s eager to try out her newly purchased Cricut Foil Transfer Tool and Cricut Joy™ machine. Did we convince you to get a Cricut machine that’s right for you too?